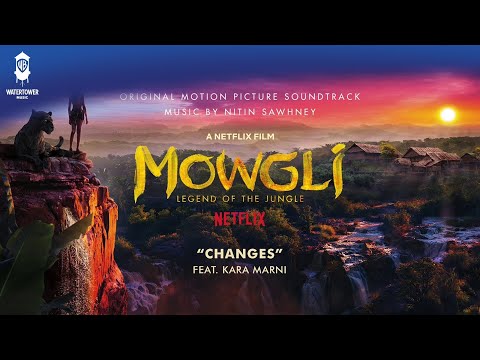 
INSIDE CREDITS:
Music composed, orchestrated and arranged by NITIN SAWHNEY

NITIN LINER NOTES:
Scoring Mowgli has been a huge journey. As a composer of Indian heritage, born and raised in England, I found myself immersed in the tale of an Indian boy approaching puberty and caught between two worlds - That of animals and that of men. The fears and prejudices, of each against the other, surface and create a tense backdrop against which we witness a child’s coming of age - Mowgli’s struggle with his own identity, as defined by others, and torn between his environment and heritage. I remember those feelings all too well. I had explored them before in my own albums... particularly in “Beyond Skin” which was released back in 1999.

The challenge of creating a fresh musical vocabulary and theme that depicted, not only, Mowgli’s internal battles but would entice us into his universe was irresistible. That Andy Serkis was directing made it an unforgettable experience in the waiting. I was not disappointed.

At one point I found myself totally lost and hiking through thick rainforest, with Andy as my amnesiac guide, when we were on a break from the shoot. Several hours into our pitch-dark stroll towards oblivion, and shortly after I’d surrendered all hope of returning to civilization, Andy casually mentioned that he’d always had an ambivalent relationship with death. “Now you tell me...” I mumbled.

In all seriousness, Andy is nothing short of a genius. The stunning film, of stellar performances and endlessly epic scenes, scored itself. I was so fortunate to be surrounded by an incredible team, with Nicholas Dodd as my co-orchestrator, Nick Wollage at the mixing desk and my own studio team of Harry, Jay, James and Tina supplemented by the invaluable advice of Warners’ Paul Broucek and Peter Clarke. Unforgettable experience and the film’s a masterpiece by the way.

It is said that “Pain is temporary... film is forever.”  Familiar with the challenges of epic filmmaking for some years as an actor and second unit director, I knew that this was going to be a complex adventure. And to embark on it I would need to find allies that would stand firmly by my side...

In late 2013, I had started to put my first mood boards together for Mowgli
(formerly aka The Jungle Book) and as I was trying to search for its tone, its heart, its pulse and rhythm, and before finding any collaborators to share the journey with, I knew one thing in my heart. That I wanted my friend Nitin Sawhney, one of our generation ‘s greatest polymaths, an extraordinary voice in world music to create the score for what was to hopefully become a visceral and immersive adaptation of Kipling’s work. I knew that he would completely understand and empathize with Mowgli’s journey as an outsider who is trying to work out his place in two changing worlds. Being of Indian descent, yet having grown up in Britain, Nitin was perfectly in tune with the movie’s themes. We began to talk excitedly about creating an aural landscape that would bring jungle sounds and music together, weaving themes that spoke of a taught yearning soul, combined with a mythical journey towards destiny... these discussions were revisited time after time as the years went by and the movie came into being... Its creation had been both wonderful and extremely difficult and painful...

And then, In the summer of 2017 Nitin sent me Mowgli’s theme... it was one of the most beautifully haunting, uplifting and moving pieces of music I had ever heard, and it marked a huge turning point, an energy that brought the film to life.
Nitin and his team of magicians had created its musical soul...