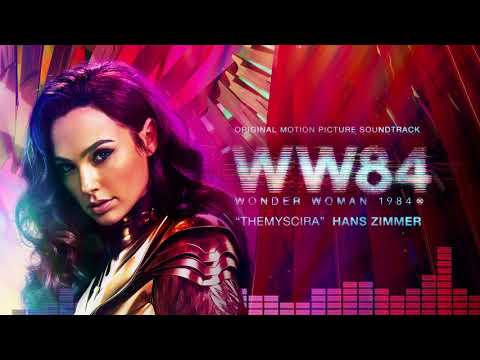 Patty Jenkins Liner Notes
One of my favorite things about filmmaking is the music that accompanies it. Film scoring is so important to the medium, and at times it can literally take the lead as the most important element creating the experience and emotion that the audience absorbs from a story. At other times, it’s the linchpin to creating a sophisticated story, by juxtaposition or contrast to the visuals on screen to make a third, new and unexpected thing.

When it came to Wonder Woman 1984 all of this complexity was essential as our goal was to pull off two distinct things that are difficult on their own, at the same time: To satisfy on the highest level in the pure and simple terms of the superhero genre, and to secretly tell a much more complex story, with multiple storylines and themes that all required a complete tonal shift as the story progressed, to reveal a much more serious note as they culminate together at the end.

All I can say is thank God one of the very few true living masters of truth, complexity and emotion was able to join us for the ride.

As someone I consider to be one of the most exceptional composers of all time, I was so thrilled to have Hans Zimmer return to the DC universe with me on WW1984. And from the start we had our work cut out for us. Not only did the film require the multiple themes that had to relate to the era of the 1980’s, and at the same time, hold all the tools for the necessary tonal shift. On top of that, Diana, our Wonder Woman, was now unfolding into a much more complex character with many new subtle layers of emotion, most of which were radically different from the gorgeous original theme Hans had written for the Wonder Woman character.

It was very important to both of us to include and celebrate that beloved battle cry of a track that has now become so beloved and synonymous with her character, but I couldn’t quite see how that tune was going to relate to many of the most important emotional beats of this film, where Diana now required a much purer and more heroic theme. But of course, Hans saw something I couldn’t see, disappeared for weeks and returned with the most mind-blowing suites of themes for Wonder Woman to now use for the next 10 films, if we wanted, all related to and unfolded from his original track.

He also gave Diana and Steve a love theme for the ages. He wrote each Max, Barbara, and the Dreamstone their own extremely specific theme suite of emotional tracks that all veered from almost camp lightness of the era, to dire, to the profound and emotional. And with the help of his incredible team of Steve Kofsky, Dave Fleming and the editorial mastery of Ryan Rubin, Gerard McCann and Rick Pearson, he brought the entire score together into something masterful and unique that I truly love each time I hear it.

Wonder Woman 1984 was a very complex film to make, and even more complex to score, but I am so proud to be a part of the resulting music borne from it. And Wonder Woman’s world of music is now filled out into a thousand shades of emotion and story. We will all be hearing the themes of for many years to come. Hope you enjoy this gorgeous score half as much as I do.